As their name says, the email lists are basically lists of email addresses, mainly collected from people who visit websites searching for the topics of their interest or solutions to their problems.

Those lists are then used in marketing for the distribution of newsletters.

Have you ever subscribed to an email newsletter on a website?

Most of us did.

It's that tiny square, mostly on the bottom of the web page offering some juicy deals, and the only information they ask is your email.

Whether you were offered a free e-book, free lessons or huge discounts, you couldn't resist finding out what it was. If so, congratulations, you're part of someone's email list.

There might be the updates you were looking for that you get when you open your mailbox. This option can seem very handy when you don't want to visit the same websites over and over wasting your time – just getting updates or discounts from those you were interested in.

But these days more probably you're receiving dozens of spam emails that you were not expecting while typing your email address on that website.

In fact, you might find out how you‘ve never left your information to a particular person/company, and now you're receiving their offers or basically spam trash emails.

How did that happen?

An email list your address belongs to was probably shared or sold to another company, who then used it for selling their own products and spamming 24/7.

And that happens quite often. But sooner or later they'll find out that bought lists are just a waste of money and time, especially used for the promotion of something new.

In this article, we'll explain to you why those who buy email lists fail at reaching people and advertising their product, as well as how to do it the better way with no additional costs.

Source:: Why Buying Email Lists is Always a Bad Idea (And How to Build Yours for Free)

The times are changing. In the past, the workplace was a place where a great number of people worked together towards a common goal, where everybody knew their positions and their assignments, and together worked to improve and upgrade each others' knowledge and skills, in addition to contributing to upstanding reputation of the firm and its upper management and employees.

Even though nowadays the same premise still exists and is strived towards, there is an interesting occurrence that is becoming more and more prominent. That occurrence is affairs between a boss and an employee.

There are many things that are linked with an affair in the workplace, some good, but most are not so good.

In further writing of the text, you will find more about the occurrence and prevalence of workplace affairs, what are the possible advantages and disadvantages of an affair between a boss or a member of an upper management team and an employee, and what to do if you are somehow linked in such workplace affair in any way, either being involved as a direct participant of an affair or a mere observer of one.

In the past, affairs or relationships between colleagues or employees who work in the same company were not popular or encouraged, due to the simple fact of the possible impact on the work and successes of the projects that it might have.

Nowadays, with the rise of more modern and forward-thinking companies, it is simply something that is not frowned upon, as long as both participants are aware that it should not have an impact on their work.

In a nutshell, the majority of employees who are approached at work, in an affair sense, are of the female gender, mostly approached by their male colleagues.

According to a research conducted by a site ...read more

Source:: Sleeping with the Boss: Affairs, Love & Sex in Numbers 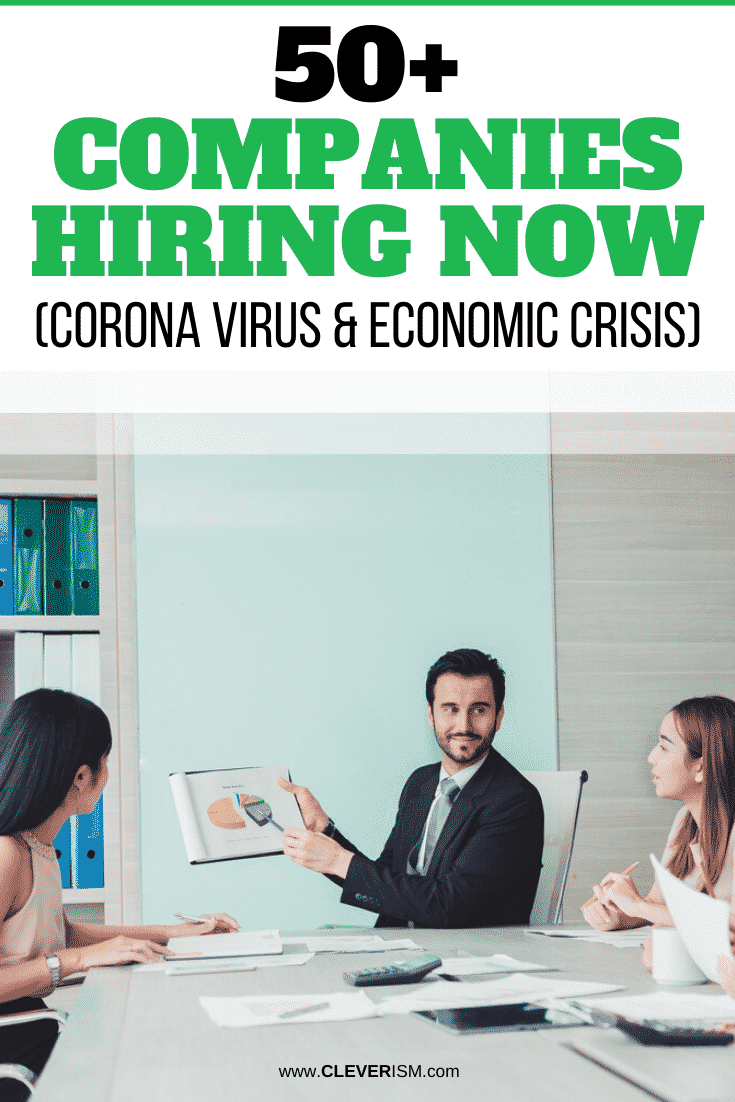 So many people are laid off right now due to the shut downs driven by politicians around the world to slow down the spreading of the corona virus.

If you are living in the US, Canada, UK, or Australia, then check out these glorious employers that are still hiring top talent while thousands of companies are on active hiring freeze (or worse).

BTW: If you know further employers hiring right now, please feel free to mention them in the comments.

If you want to search for your next job, then checkout those 3 million open positions right now.

£31,371 - £33,799 per annum:
360 Resourcing Solutions :
An exciting opportunity has arisen at Ashfield District Council for a CCTV & Community Protection Team Manager to join our team. You will be based in
Kirkby-In-Ashfield, Nottinghamshire, United Kingdom ...read more

£24,799 – £26,999 per annum:
360 Resourcing Solutions :
An exciting opportunity has arisen at Ashfield District Council for a Domestic Violence & Vulnerability Officer to join our team. You will be based...
Kirkby-In-Ashfield, Nottinghamshire, United Kingdom ...read more

£31,371 - £33,799 per annum:
360 Resourcing Solutions :
An exciting opportunity has arisen at Ashfield District Council for an ASB & Triage Team Manager to join our team. You will be based in Kirkby-in-A...
Kirkby-In-Ashfield, Nottinghamshire, United Kingdom ...read more

£37,849 - £40,760 per annum:
Telford & Wrekin Council:
Do you aspire to work for an ‘Outstanding' Local Authority? Here at Telford and Wrekin Council, we have been judged to be outstanding overall in terms
Telford, Shropshire, United Kingdom ...read more